I shot some video of the 1500/5000M Final at the Olympic Trials for both the men and women. Video was shot at 210 FPS with less than 1-2 laps to go. It is nteresting to see the different types of running form at such an elite level. The two runners with exceptional running economy were Matt Centrowitz and Morgan Uceny. Look for Morgan Uceny to possibly medal at the Olympics. Her form is exceptional.

A client of mine sent me this photo and I just had to share it with you. I laughed when I first say this photo because it speaks truth in the?precetion of?my own running form. What we precieve as?normal posture, movement, and running form can actually be?far from normal. The poor prection of normal movement can lead to dysfunciton and pain in runners overtime if not addressed.

Runner’s, learn if your perception of normal posture and running form is correct. It will save you a lot of time and lost training in the future.

The Beauty of Running with a Hightly Stable Core

Above are two amazing runners, Carl Lewis from the past and Matthew Centrowitz, the future of US distance running. These two amazing runners exemplify high levels of abdominal stability and control. This enables them to produce efficient force into the ground resulting in speed and endurance.  Runners first need to understand the function of the core including what muscles make up the core before they can take full advantage of their role in supporting and controlling movement from the inside out.

The core muscles function to prevent excess movement in all planes of motion. These muscles provide a stable base so the arms and legs can do their job in producing and transferring force to the ground efficiently and effectively.  Every muscle, 360 degrees surrounding the body from the shoulders to the pelvic floor represents the core, and each one of these muscles, big and small, play a role in providing an environment of stability. A paradigm shift needs to occur in our treatment and training of runners 360 degrees surrounding the core. It is essential that every athlete understand that not one of these muscles ever works in isolation, therefore, why are they often trained in isolation? The core represents a team of muscle that co-contract to provide stability and control. The co-contraction of these abdominal muscles in runners is analogous to an orchestra comprised of many musicians with different instruments, but each with a common goal to produce an environment that is highly controlled and always in harmony with each other.

One of the most important, if not the most important, muscles in the core is the diaphragm. The diaphragm is not often thought of as a muscle, and is often forgotten and undertrained in many athletes. The diaphragm has two primary functions. First it aids in respiration, and secondly it helps to stabilize the core through an increase in intra-abdominal pressure. Like any muscle, the diaphragm can function optimally or suboptimally. For runners, the ability to efficiently bring oxygen into the body and provide trunk stability is essential whether you are an elite or recreational runner.

The diaphragm is most efficient for respiration and core stability when the spine is neutral. A neutral spine is one that maintains the normal curves of the spine (see pictures below). 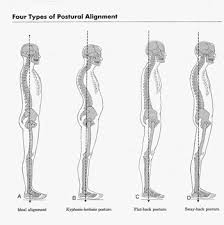 In order to achieve a neutral spine the thoracic spine must be flexible/mobile in all planes. Motion always goes to the point of least resistance. Therefore, if the thoracic spine is stiff and our pattern of breathing is dysfunctional that will force motion to occur excessively at the lumbar spine and pelvis leading to the inability to control the core during running. When the spine is neutral, correct breathing patterns can occur and better control of the core can be achieved. Visually, this can be represented as two rings lying parallel to each other, one ring comprised of the rib cage and the other the pelvis. For a runner, this can lead to better oxygen intake and utilization and a more efficient transfer of energy to the ground ultimately increasing the economy of running.

When training the core the focus should be on developing proper neuromuscular control while supine, sitting, standing, walking, and finally running, all with the goal of maintaining a highly stable neutral spine. All too often, my colleagues and I are asked for “Core” exercise routines that will produce strength to prevent injury. What our clients and patients soon learn is that each walk, run, or day at work is a core exercise.  Core development is different for every patient and does not stop once you leave the gym or after a hard tempo run. Like running, it is a skill that needs to be intentionally developed overtime.  With poor posture and poor movement patterns we loose the skill and ability of the nervous system to communicate automatically with these muscles. Therefore core training and work/life should be focused on regaining these proper patterns in order to develop a highly stable core. As we practice bracing the core, you will first need to be consciously competent before you can be unconsciously competent. What this means is, as you become more skilled at activating the core correctly, overtime the brain will develop a motor program that allows the core to work automatically.  The Gait Guys developed the acronym S.E.S for developing proper movement, which stands for skill, endurance, and strength in that order. As runners, we often want the strength first before we have developed the skill and endurance of the movement pattern. You must understand that the body will always do what you ask of it. For a runner, that means getting from one point to another in a given time or distance. If strength rather than skill is developed first, the runner will inevitably be less efficient and ultimately lead to a plethora of lower extremity compensations and dysfunctions.

Remember, the function of the core is to create a foundation so that the arms and legs can be highly mobile and generate force. Therefore, exercises like sit-ups or back extensions that move the core away from a neutral spine position should be de-emphasized. Exercises that promote control and stability of the core like planks, side planks, single leg dead lifts, chops, and single leg standing with opposite leg movement should be emphasized. The purpose is to increase the skill and endurance of the core to maintain a neutral spine under force and with movement.

Specificity of training must be established first and foremost. Just like a coach will not train a 1500 meter runner the same as a marathoner, we as health professionals need to understand every patient, client, and runner is different and can not be given a set of exercises without them first developing the skill to perform the movement or exercise correctly. Remember, anybody can perform a plank, but can it be done correctly so that all the muscles surrounding the core are working together and in the right pattern to allow for proper control and breathing? If you are a runner with one injury after another and do not live on the central coast of California find a health professional in your area that understands gait and running mechanics. Most importantly appreciates the importance of proper breathing patterns and its affect on the core.

So together, as runners who want to run injury free, let’s start shifting the paradigm in core training from the inside-out, 360 degrees.

Precision is open and treating patients adhering to the necessary precautions to stop the spread of Coronavirus. Follow us on Facebook for updates.